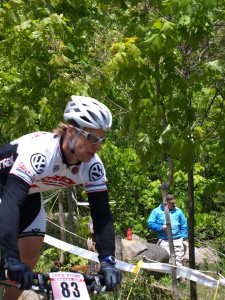 Eric is a physical and health education teacher who has worked extensively with athletes coaching high school mountain biking and cross country running, while teaching outdoor education as well as fitness and strength training. His university experience included 3 years testing national team athletes in the exercise physiology lab at the University of Toronto. Combined with qualifications as a Certified Fitness Appraiser his background in exercise physiology with practical applications to sport training is extensive.

Eric has been actively competing in mountain bike racing for 21 years. In the first 5 years of racing he competed as a Pro/Elite Mountain Biker at Ontario Cups, Canada Cups and World Cups actively racing on the Ontario Team in both 1993 and 1994. In the last 15 years he has competed as a Veteran and Master Expert Racer culminating with a selection to the Canadian National Team in both 1997 and 1998 for World Championships. He has also been an event organizer thru that same 20 years, best known for the Uxbridge Icebreaker and the weekly series races originally at Fred’s Farm and now at the Durham Forest. He has been recognized in Ontario as the MTB Organizer of the year in 2003 and MTB Contributor of the Year in 2007.  As a racer in the Master Expert category over the last 2 years he has continued to maintain podium appearances and has placed 2nd in the overall category in both 2009 and 2010.

Eric’s qualifications include a Bachelor’s of Physical Education with a major in Exercise Physiology, Bachelor of Education, and a Master’s in Education all thru the University of Toronto. He has certificates as both a Certified Fitness Appraiser and Registered Fitness Appraiser.